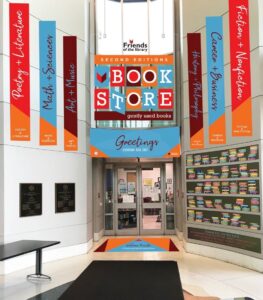 Your favorite gently-used bookstore is getting a facelift! Second Editions Bookstore, located in the lobby of the Benjamin L. Hooks Central Library (3030 Poplar Ave.) will soon have a new look that’s bound to attract attention. The new storefront, designed by longtime graphic artist Lonnie Robinson, will be installed in October 2019.

“Too many people enter the library and do not realize that there is a bookstore there,” noted Friends President Jacqueline Wallace. “We hope to increase awareness so that more people will visit, shop and raise revenue by 10 to 20 percent.”

With a clear objective in mind, Robinson said he began to translate the Friends’ goals into an attractive and eye-catching design.

“I began to look at storefronts around the country and eventually found one in North Hollywood,” Robinson said. “I wanted to make the entrance grander but not over the top, and bolder so that when you enter the library, you couldn’t miss it. I really wanted it to have an appearance of something new and more inviting, and to include a floor graphic to make better use of the space.”

An avid book lover himself, Robinson said he was always taught the value of a book.

“My mother and grandmother taught me that a library is a building that you just should not pass. So, it makes me feel great to know that I’m supporting Libraries, Friends and the citizenry,” Robinson said.

Hoping to encourage readers not to pass by either, Robinson commented on the value that shoppers will find on the other side of Second Editions’ doors. “When we hear the term ‘used,’ we think ‘downgrade.’ I always laugh to hear someone all a book ‘used’ because, when you think about a book, it is an upgrade that it has been used. It is at its greatest value when it is used; when more people are reading, it’s a win-win for everyone involved!”